We’re continuing our series of posts this month with a piece by Elizabeth Farebrother, who is currently working towards her PhD at University College London investigating changing animal use in Western Asia during the Neolithic and Bronze Ages. Here, she shares her MSc research, which was part of the ongoing, multidisciplinary Chicken Project. Thanks to Liz and the Chicken Project Team for contributing!

The integration of zooarchaeological research and stable isotope analysis can be incredibly insightful, allowing us to go beyond traditional research questions, and investigate, where relevant, socially-grounded questions from a scientific perspective. My introduction to the world of stable isotope research came through the AHRC-funded Chicken Project, and my MSc formed part of this ongoing collaborative research initiative to investigate human-fowl interaction.

Wien-Csokorgasse – an Avar-period (6th-8th Century AD) cemetery site – is located in Vienna, Austria, and was excavated as a rescue operation in the 1970s. Zooarchaeologist Henriette Kroll carried out the faunal analysis for the site, and noted that the deposition of chickens within human burial contexts was both sexually, and hierarchically stratified; cocks were buried with males and hens were buried with females. Significantly, the length of each cockerel’s tarsometatarsus spur also corresponded with the inferred status of the human burial (Kroll, 2013). 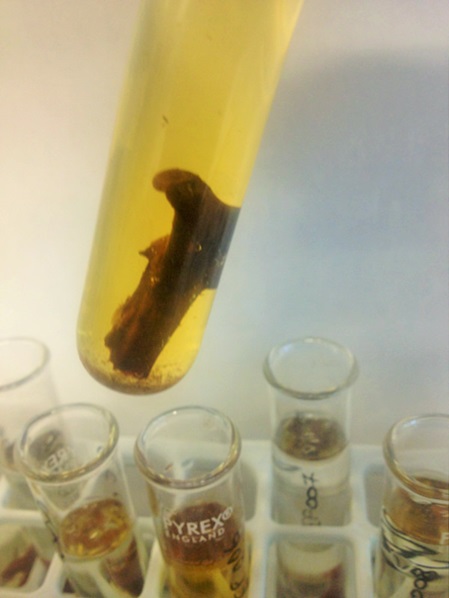 Chicken bone is demineralised in order to extract the collagen for isotopic analysis.

To investigate the potential reasons for the inclusion of chickens within burials at Wien-Csokorgasse, carbon and nitrogen isotope ratios from the bone collagen of each bird were analysed and compared with the existing stable isotope study of the humans they were buried with (Herold, 2008). Prospective indicators for dietary differentiation, including biological sex, age, and cemetery chronology were explored. Perhaps the most striking result was the dietary correlation represented by δ15N values. This dietary signature would have built up in the bone collagen over differing life spans between human and chicken. To this end, the data suggest a significant overlapping period of time where each chicken may have lived alongside the human individual they were buried with.

The results of dietary stable isotope analysis were viewed through the lens of anthropological analogy, and interpretation included a diachronic survey of published and grey literature of contemporary bird iconography and bird diet in Europe. This meant that the wider social implications and behavioural patterns amongst the groups who used Wien-Csokorgasse were also considered in the study.

Thank you to all involved in the production of this MSc dissertation. This study would not have been possible without the help and expert guidance of the AHRC-funded Chicken Project, Dr Naomi Sykes, Dr Holly Miller, Dr Henriette Kroll, the NERC Isotope Geosciences Laboratory (BGS Keyworth) and the University of Nottingham.